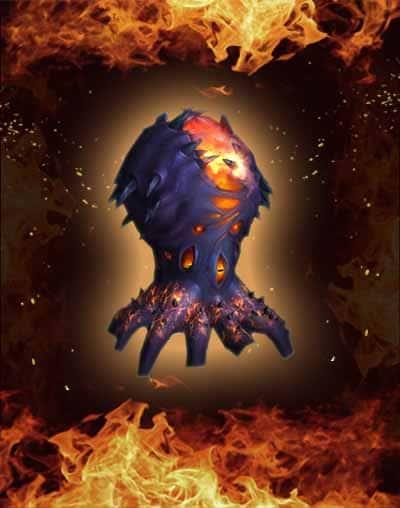 Among the 4 Old Gods of ancient Azeroth, N'Zoth is the least powerful one. Long time ago the titans imprisoned the Old Gods deeply underneath the ground in order to protect the world from the evil. Until the start of the Blood War, it was difficult to find notorious N'Zoth as he remained a mystery for others. Staying the last of the Old Gods (apart from Y'Shaarj), he had no contact with the curious adventurers.

Before the war started there was little known about N'Zoth. The majority of Azeroth essences knew neither the name of N'Zoth nor the way he looked like. It was claimed that he had been put to the black ocean depths for ages. Also, some of them told that the main aim of N'Zoth was to change all those noble and pure things and to use them in his insidious plan.

There were rumors telling about N'Zoth's participation, together with 2 other Old Gods that remained, in the corruption of the Neltharion and turning him into Deathwing. Besides that, he was one of the creators of the Emerald Nightmare, and also affected the transformation of Queen Azshara as well the Highborne into the naga. For long a period of time the main information that was known about these creatures was mostly a speculation. In the process of the Battle for Azeroth, N'Zoth turned into the real threat for all mortal races of Azeroth. The aggression of his naga servants was only rising, and with the help of the Tidesages they spread their impact to Kul Tiras. Finally, the N'Zoth's relations were broken due to some schemes the Queen Azshara had come up with.

Eventually, the time of changes had come. Having heard the words of N'Zoth, Deathwing, with all his fury and anger, burst from Deepholm into Azeroth. All of it was resulted in the Cataclysm and caused huge destructions within the territories of Azeroth. N'Zoth filled Deathwing with unbearable pain and made him only harsher. Al'Akir had a try to seize the Forge of Origination, that's why he had attacked the Uldum. At that very time, one more N'Zoth's ally who was Queen Azshara ordered naga warriors to attack Vashj'ir. Neptulon itself and his warriors — minions — didn't want to obey N'Zoth. But they had to pay for this decision. N'Zoth wanted to receive the power from Neptulon, so that he would be able to have control over the seas of the world. That would be useful for naga as they wanted to make all travels between the lands of Azeroth impossible. N'Zoth had a strong belief that both of the factions wouldn't be able to stop him at any price. He also believed that in case of at least one successful Old God's campaign, the Hour of Twilight would be declared. Nevertheless, some time after there appeared the heroes of Azeroth who were able to resist the activity of N'Zoth's combatants in Uldum, deephold and Vashj'ir. Ragnaros and his fire elementals were summoned by Deathwing and the Twilight's Hammer. They made it in order to attack the Mount Hyjal and the World Tree Nordrassil, because N'Zoth thought that if the Nordrassil is burnt, then it would be powerful damage to the world. Fortunately, by the help of a joint effort of warriors the Hyjal was protected.

The situation during the war changed because the defenders of Azeroth fought back the Old Gods' warriors. They received the Dragon Soul and then gave it to Wymrest Temple. In the temple Thrall and the Dragon Aspects started empowering it, so that it could be used for Deathwing destruction. Deathwing and his allies attacked Wyrmrest, and when N'Zoth got to know about it, he ordered n'raqi minions to join him. Nevertheless, Deathwing was forced to flee toward the Maelstrom when he was trying to return into Deepholm. And the defenders of Wyrmrest continued to follow him. That happened so, because the Aspects succeeded in improving the Dragon Soul, and they used it against Deathwing. N'Zoth had a sense that his ally was almost defeated, and that his plans weren't going to work out. He still wanted to change the whole situation, so he gave Deathwing so much power, Deathwing had never had before. But the Dragon Soul was unleashed by Thrall and the corrupted Aspect was destroyed. That was the moment when all the plans of N'Zoth had come to the end.

N'Zoth and Xal'atath negotiated and it was stated that Xal'atath would guide the champions of Azeroth into the Crucible of Storms with a few powerful relics that they have. As their bargain was successful, N'Zoth set Xal'atath free, but he wanted her to leave the blade she had as N'Zoth wanted to use this blade for his plans. Having a look at Bringer of Truths, N'Zoth said that he thought about their fate; he also said that everyone who was sleeping would be awakened. After that he gifted them an item which they could use for seeing all the truths. Everyone who has got this gift can use it on everyone having a blessing of the Old God. But everyone from both factions has got a chance to get rid of this N'Zoth's gift if they try a dangerous and tough ritual.

Some time later several seekers came to the Crucible of Storms with only one aim — to return the artifacts and to stop N'Zoth. They succeeded in the battle and won the army of N'Zoth, including Uu'nat who before his death told N'Zoth that those heroes were worthy. The champions of the Horde then found the empty blade — the one which used to be the item of Xal'atath. They saw that the blade had such great power, so they took it in order to give it to their leader. When they took the blade, N'Zoth told them that the fall of night revealed her true face and that she would only bring ruin. So, the champions of the Alliance understood that the blade was taken by the Horde.