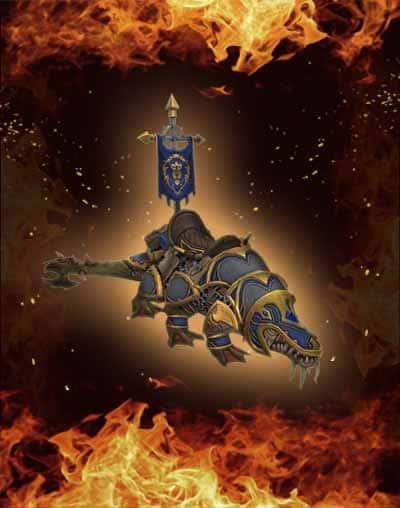 The Vicious War Basilisk is a war riverbeast mount in WoW. Gamers have an opportunity to receive it when their rating in Arena or RBG is more than 1400 (in Battle for Azeroth 3rd PVP Season). However, receiving this mount from Vicious Saddle and after the release of the third PvP season of BFA is impossible. In fact, in World of Warcraft there's a great number of mounts that can be received only within limited terms. And that's why mounts like this are rare and esteemed by the players. But you still may get this mount if you purchase the boost — don't hesitate as this is a special offer!

We prefer using the most popular and fastest way to get the mount —to win in the Arena. No doubt that it takes less effort to find several group mates than to choose a good RBG team. That's why if you have little experience in PvP fights, we can help you in getting these achievements. In case you want to buy this boosting, things you'll get are as following:

Sadly, but players are not able to purchase this mount for game currency in WoW; the price of the mount is numerous and difficult battles. In order to get it, it's not sufficient simply have a try. Players should be aware of much other stuff: for instance, the tactics in the Arena fights, the knowledge about the class a gamer plays for and so on. This process is quite time-consuming. But there's also one more decision that is simpler and faster, and we can help you, because the mounts in the game are not only the way players transfer from one point to another, it's also kind of representation of the coolness of the player. But players having a desire to get a new PvP mount and wanting to make their game more interesting should meet some of the requirements for that.

How to get Vicious War Basilisk mount?